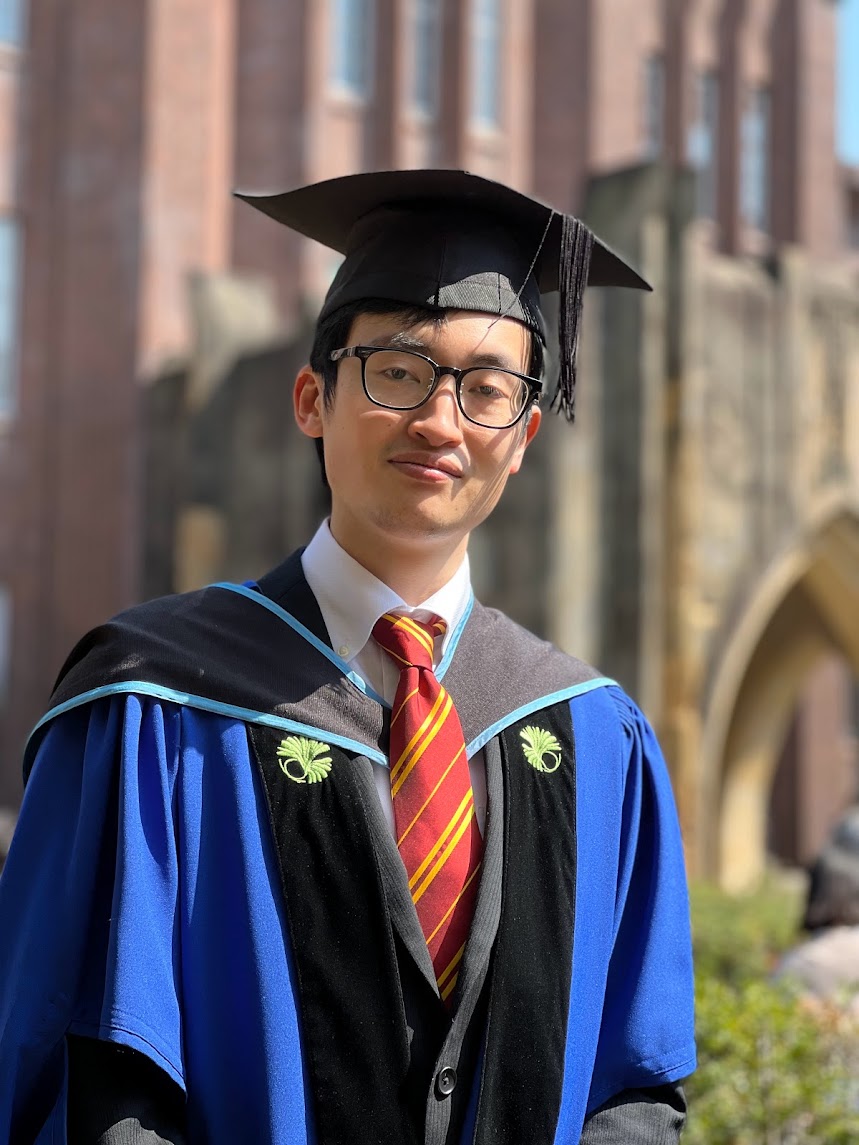 I like making, controlling, and playing with robots. Through my research, I hope to create robotic systems that can act in the chaotic, beautiful everyday environments that we live in, to hopefully make our lives a little bit easier. Currently, I believe that the introduction and exploitation of compliant structures are an important key to approach that problem. I hope to interact with a wide range of technologies, from the material to control level in my research.
PhD student researching robotics at ETH Zurich.

A subset of my Japanese blog, translated into English

Design, fabrication and modeling of an integrated design for a soft continuum proprioceptive arm (SoPrA) 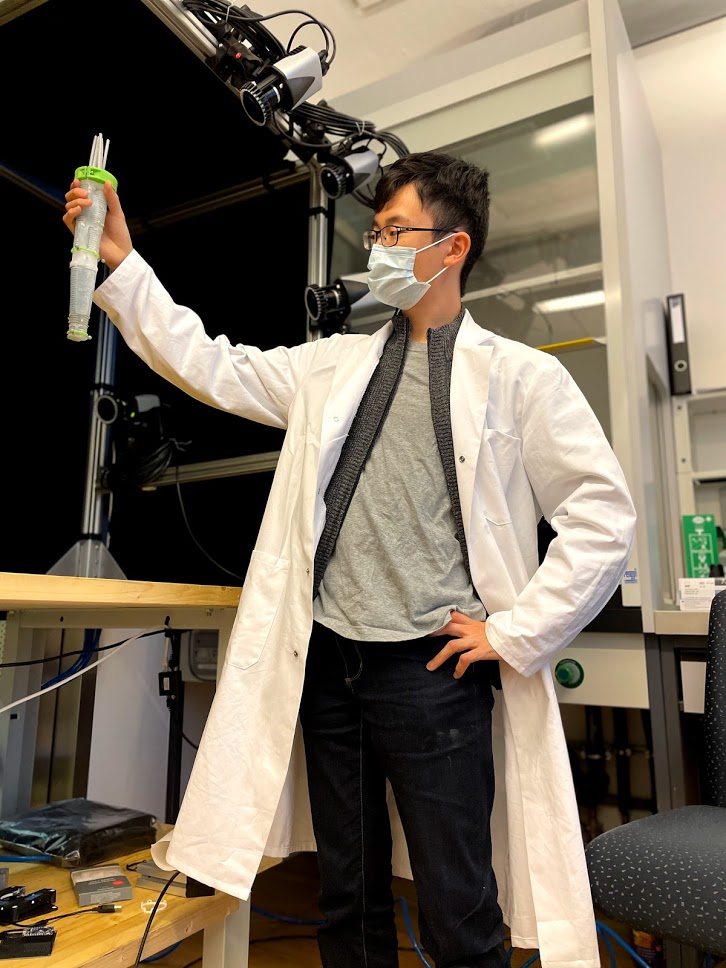 This was a 5 1/2-month research visit at the new Soft Robotics Lab conducted under the guidance of Prof. Dr. Robert Katzschmann, in which I have created a new design for a soft pneumatic continuum arm that uses fiber reinforcement to restrict radial expansion, contains internal proprioceptive sensors to measure the bending state of the robot, and developed an associated model that can describe the dynamic behavior of the soft robot.

I am currently researching the control of musculoskeletal robots at the JSK robotics lab in UTokyo.

These robots mimic the musculoskeletal structure of the human body, and are hoped to generate more natural movements than conventional axis-driven robots.

However, the control of such robots is not straightfoward, and an infinite set of commands can be proposed even for simple reaching movements with the arm. My current research topic is to control these robots by applying principles discovered in neuroscience. Since the hardware of these robots are designed based on the human body, I hope that a similar approach to their software will yield effective motions.

The Ionobot was developed in collaboration with the MIT Lincoln Lab, as part of the 2.013 Engineering Systems Design capstone class. Fluctuations in the ionization level of the earth’s upper atmosphere lead to inaccuracies in GPS and radio signals. In this project, we have developed “Ionobot”, an autonomous surface vehicle that acts as an ocean platform for ionospheric measurement to take measurements not possible by existing ground-based stations. The boat must autonomously navigate to its designated location of measurement, and remain there for up to 6 weeks at a time under its own power.

In this project I have worked as the manager of the power supply system team. We created the required specifications through repeated discussions and negotiations with other teams (especially for solar panel size and battery weight), designed a system that met the needs for the required power output and oceanic / climate conditions, and evaluated the performance of the solar panels through experiments. 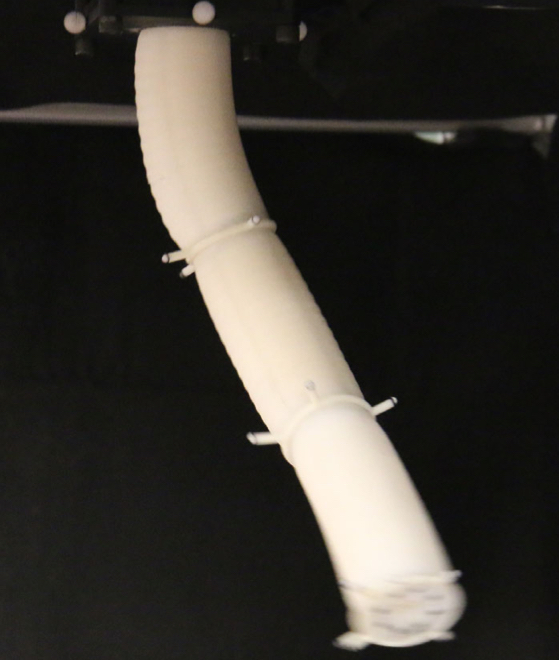 During my exchange program at MIT, I joined the Distributed Robotics Laboratory as an UROP student and conducted experiments on a soft pneumatic arm made of silicone. My contributions in the project included writing most of the C++ software that implements the proposed dynamic controller for the arm, fabricating the soft arm by casting silicone, and also proposing new parametrizations for describing the configuration of the arm.

Lead developer for the original version of the ice cream robot 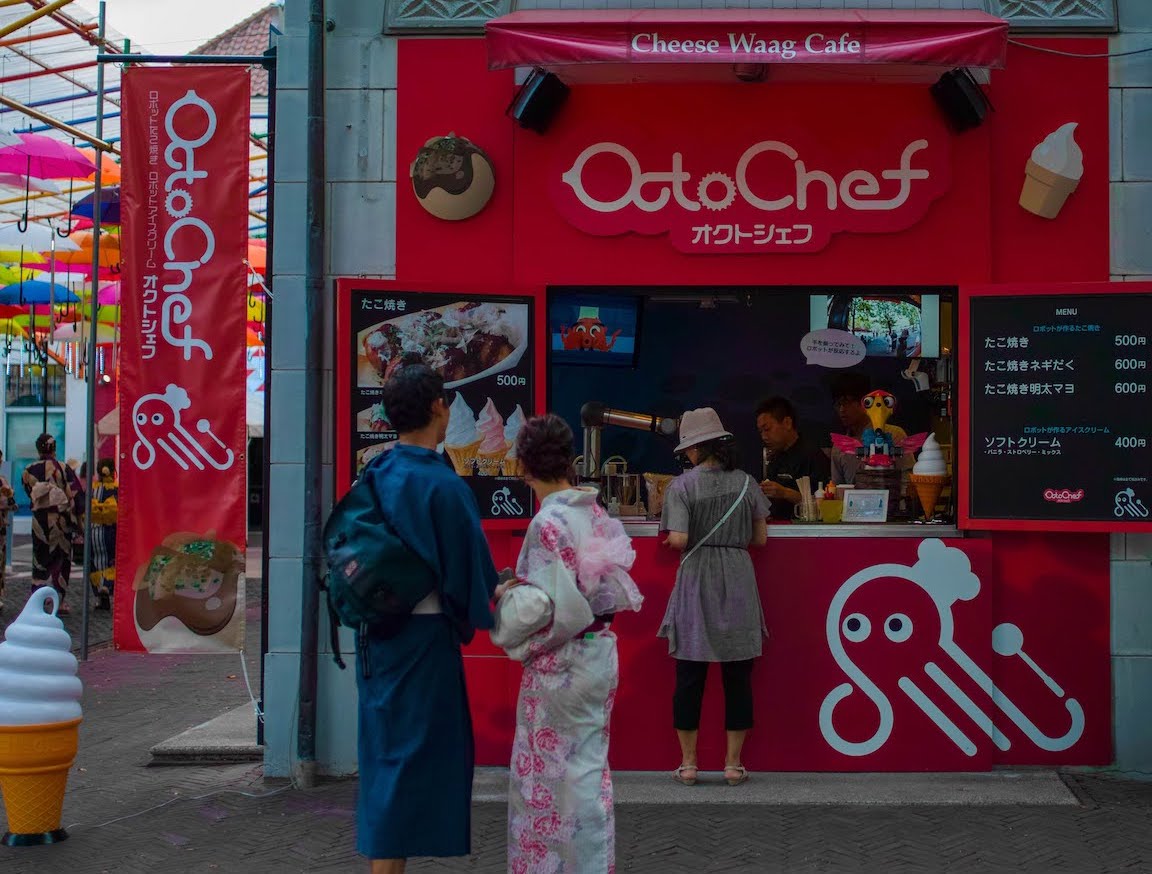 Connected Robotics is a company in Tokyo that aims to revolutionize cooking through the use of robots. During my first internship there from February to August, I was assigned to start development of a new robot that can make soft serve ice cream.

The robot is designed not just to serve ice cream, but also to entertain customers as well- that is why it is designed as its own character. It also has a wide-angle camera that can detect customers and interact with them.

In its hand is a weight sensor (load cell), which can measure the weight on the hand. The data from this is used to dynamically adjust the speed of the spiraling movement when it is serving ice cream. This enables the robot to serve about the same amount of ice cream each time, regardless of the flow rate.

After 5 months of development, the robot was deployed to Huis Ten Bosch, a theme park in Nagasaki, Japan. I still occasionaly intern at Connected Robotics, and continue developing the robot. The video below is the newest iteration, with improved hardware, motion control, and software architecture. It can be seen in Makuhari, in the shopping center Ito Yokado.

not affiliated with Morinaga 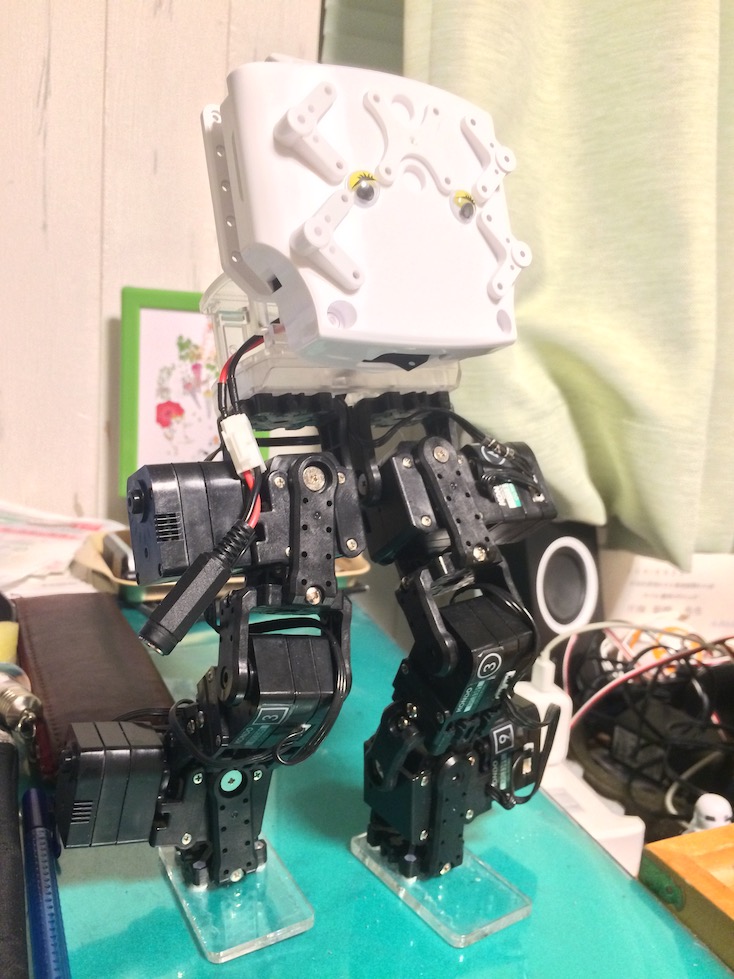 Watching the video 人間のような自然な歩き方をするロボット(Biped robot walks just like a human being.) inspired me to create one of my own walking mini robot. I decided to first read up on past research about bipedal walking algorithms, and found countless walking gaits. They range from simple (interpolating between known statically stable poses to create motion) to I-have-no-idea-how-it-works complex(sing convex optimization to plan dynamic motion trajectories for the Atlas robot).

Here, I implemented a gait based on the LIPM(Linear Inverted Pendulum Mode). It’s very lightly described in the video, but please refer to the original paper if you’re interested. 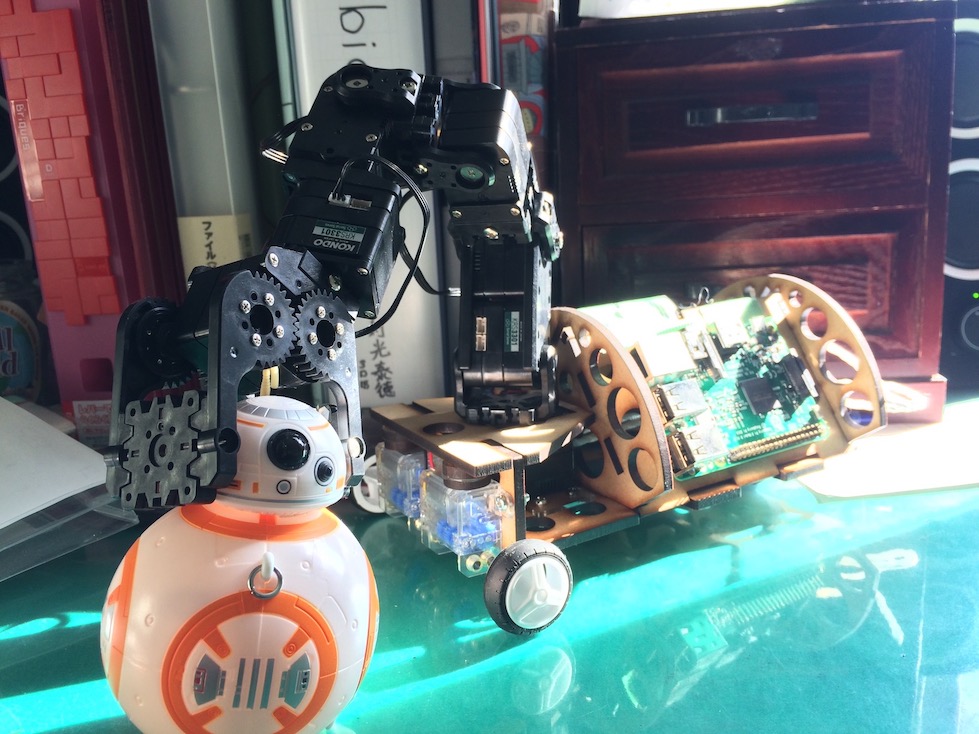 The robot was originally created as the end-of-year project for 3rd year students at UTokyo(Dec. 2017 ~ Jan. 2018), and I have later expanded its capabilities so it can be controlled through LINE, a popular messaging platform in Japan. It runs ROS, and I have also made it compatible with the motion planning library MoveIt!, so it can be moved to avoid collisions with itself or other obstacles. The body was designed in Fusion 360 and made with laser-cut MDF, and the robot arm is made by Kondo Kagaku.

As part of the May Festival exhibits at UTokyo, I have added the LINE messaging feature. To avoid users controlling the robot from a distance, a verification system using QR codes was created. Please see my newer video (in Japanese) for a demo video.

A connected rubber duck of the future!! 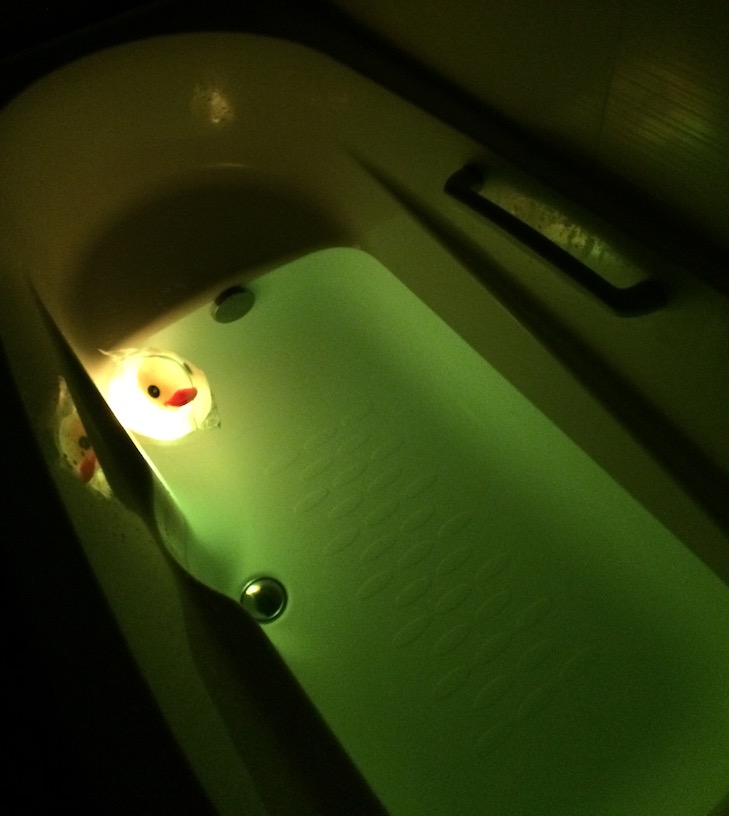 Presented at JPHacks 2017, a student hackathon. It was a five-person team comprised of students from the University of Tokyo.

Designed to prevent drowning accidents in the bathtub. The Duck has an accelerometer built inside, and its data is sent wirelessly to a host PC. When it is detected that the human is drowning/passed out, it sends an alert to the server, which can update the Web interface as well as call family members on the phone.

I had great fun in contributing to this as the hardware engineer(the innards of the duck), and witnessing my talented teammates in action. 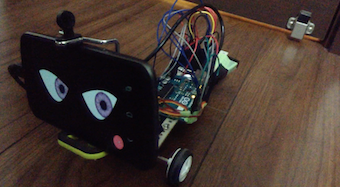 This robot interfaces an Android device with an Arduino, so the robot can utilize the processing power, the display, the internet connectivity etc. of a smartphone. I developed this as the final project for an Android app developing course.

Just a random idea I had. Made it in just a few hours, but I’m quite proud of how it ended up.

A working educational model of a space probe 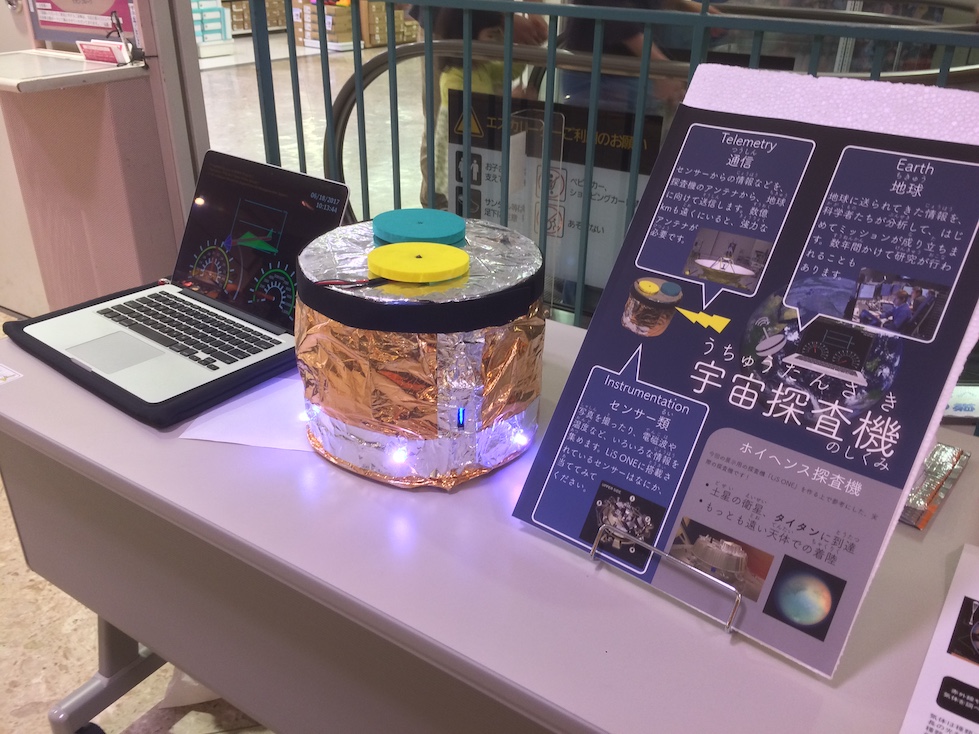 Presented at FEEL 2017, an educational space event held in Sagamihara. Created by 4 members(including me) of the space science communication organization, Live in SPACE Project.

This “space probe” has multiple sensors inside(an accelerometer, gyroscope, temperature sensor and light sensor), communicates with the mission control(a PC) wirelessly and works on a battery. This lets the children hold and play around with the probe, guessing the roles of each sensor and learning about space exploration in the process. We also had a panel describing actual space missions, and the data that they collected by using the same types of sensors as found on LiS ONE.

summarize a video into a beautiful "map" 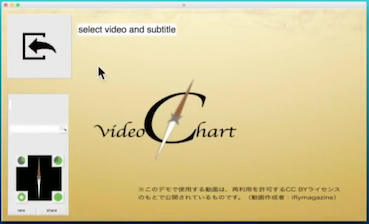 Presented at the 2017 Yahoo! Japan Hackday hackathon, as a two-person team. An application written in Python that takes a video(.mp4) and subtitle file(.srt), and outputs an interactive summary of its contents.

Turns your screen into a "window"- without any special hardware 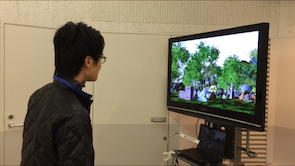 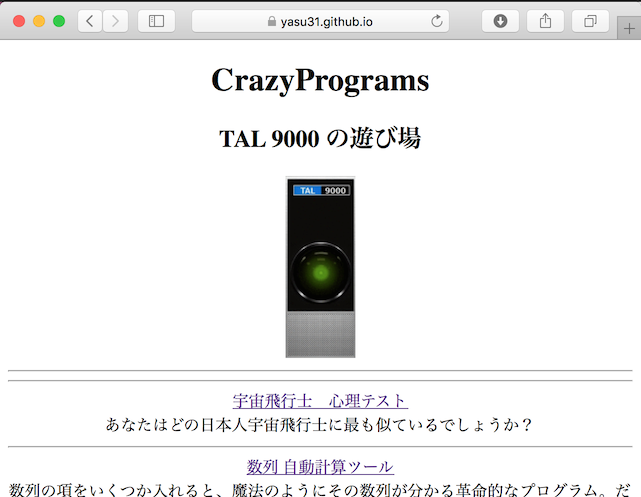 A stupid website that I made a long time ago. It’s mostly in Japanese.